Elizabeth Jane Barnes (nee Martin), was born in Cork, Ireland, though the year of birth is uncertain, ranging from 1744 to 1800. Her age at death is also uncertain, ranging from 90 to 93 years. Certainly, however, Mother Barnes was a remarkable woman. She is said to have been the seventh daughter of a seventh daughter. She rests in an unmarked grave in Sheldons Corners,Ontario. At an early age Elizabeth eloped with Sergeant Robert Harrison, and together they emigrated to Cobourg, Ontario. Sometime after the birth of a son, Sgt. Harrison died, at an early age.

Elizabeth later married David Barnes, and they settled near Plum Hollow, just North of Athens, and South of Smiths Falls, Ontario. Once a thriving agricultural center, with a famous cheese factory, Plum Hollow today is a sleepy crossroads. But, in the mid-1800s, Plum Hollow was known throughout Eastern North America, as the home of the Witch of Plum Hollow.

People traveled hundreds of miles/kilometers to consult Mother Barnes. They came to her simple, one-room log cabin (still standing today; sadly, the historic plaque on the site has been stolen) to consult her. Mother Barnes was known to have solved mysteries, including a murder, and to have located a hidden treasure.

Mother Barnes made no bones about her paranormal powers; she was the seventh daughter of a seventh daughter. She charged 25 cents for her services, but that was enough in those times to raise her seven children, after her second husband left her to be a shoemaker in nearby Smiths Falls.

Mother Barnes became famous for telling fortunes, and her services were much in demand. One of her clients is reputed to have been Sir John A. MacDonald. Her reputation lives on today. Growing up nearby, I knew the story about the “Witch” of Plum, Hollow, and that “Witch” was a relative term. Even as a child, when I heard of this witch, I had no images of evil.

Why?  Well, in rural Ontario at least, the term “Witch” had a few meanings.  One invoked images of Salem (Mass., not Salem Ontario, which is about 50 Km North-West of Plum Hollow); the image of burning retribution. The other image was benevolent: witching for water was a common practice, and fortune tellers were witches.

Water Witching was, and still is, a method of finding out, or ‘divining’ the location of underground water; the place to drill a well; it involves witching water with a willow wand. 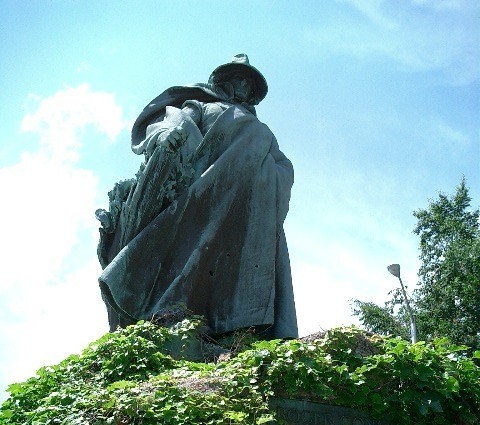