In less than the last 400 years, there have been in excess of 400 shipwrecks on the rocky shores of Anticosti Island.

Anticosti Island is situated right at the mouth of the St. Lawrence River.  Some 8,000 square kilometres in size, Anticosti Island is large enough to have Prince Edward Island for lunch with room left over for a dessert of half of PEI again.  Now that’s big.It is very sparsely populated (264 people in 1991), with most residents concentrated in the village of Port-Menier on the western tip of the island. It was discovered by Jacques Cartier in 1534, and was granted to Louis Joliet by Louis XIV as a reward for discovering the Mississippi River. It stayed in Joliet’s family until 1763, when it was annexed by the British colony of Newfoundland. Lower Canada regained it in 1774. It supported timber harvests until 1972, and is now an important site for deer  hunting.

This beautiful island with its cliffs, rocky beaches and teaming wildlife, is also the home of many treacherous reefs which have proven to be the undoing of many a mariner.

There are many stories surrounding the goings-on at Anticosti Island including one of a mad trapper who convinced other islanders that he was, if not himself the devil, at least in the company of a devil.

Louis Oliver Gamache lived in Port Menier between 1831 and 1857. No one really knew where came from but then no one really cared to find out.  Gamache was a strange bird.  On a regular basis he would trick a local innkeeper into believing that he was having dinner with the devil so that the innkeeper would give him two helpings of dinner. He would them quickly eat both while paying only for one.  Gamache was a primarily a farmer but he also shared duties manning the government emergency supply depot.  In this role he saved victims of shipwrecks and salvaged supplies, often for his own use.  Although salvage was a common practice on Anticosti, Gamache was often accused of being a “moonraker” as he purposefully mislead ships to hit the island shore.  Gamache died in the winter of 1900.  He was found in the spring in his cabin sitting comfortably in a chair with his feet resting in a small tub of solid ice. 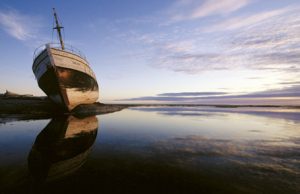 The Granicus struck a reef on the eastern part of Anticosti island.  The crew and passengers, numbering 30 in total, including 3 children and two women, all made it ashore and wintered over near Fox Bay, living on supplies salvaged from the ship.  On May 8th,1829, a whaling schooner found the camp and were horrified by the sight.  The wreck-survivors were all dead but they did not die of exposure, disease or malnutrition – they were murdered, cooked and eaten.  The ship’s log was found with entries up to April 28th.  Nothing in it gave a clue as to what had happened.  Sometime between April 28 and May 6th, a period of only 8 days, someone had killed the survivors, cooked some body parts and left others to hang on a line.  In one of the cabins, the horrified whalers found, lying peacefully in a bed, a recently-deceased man, whom they assumed was the murderer.  Below is a report from the Quebec Mercury dated August 18, 1829:

Captain Gabriel Gabouri, of the schooner Elize, has lately returned from Anticosti Island, and states, in addition to the particulars already published of the horrible state in which the bodies of the unfortunate sufferers, from the wreck, supposed to be of the Granicus, were found; that Mr. La Roque, a partner in the Northeast Company, at the post of Mingan, showed him a long boat which he said had been brought to Mingan by the Indians. He landed with his whole crew at the post in Belle Bay, Anticosti, on the 16th July, and found in one of the houses, nearly half a bushel of pieces of bone, about six inches in length, and scraps of flesh; that a hole was dug in the floor where they had made their fire. It appears that they were in two parties; one party in the building above referred to, the other in a small building about ten feet square, in which there was an oven; they found seven heads in the oven, one with red hair. On the 18th July, they found buried in the earth, a box painted black, covered on the top with a yellow cloth. On taking it up, they found it filled with bones, entrails, and pieces of flesh, that the stench was so great they speedily re-interred it. There was a quantity of clothing, boots, &c., a woman’s dress, and eight or ten children’s dresses; that in some of the clothes they found cut, apparently made with a knife; that in one pair of trousers which he stretched upon the grass, he counted ten knife cuts between the middle of the thigh and the waistband; he adds that he “thinks from the marks he saw, the murders of all had been perpetrated the same day”. Michel Godin, who was at the post in 1828, left there 15 cords of wood in a shed, there was about two cords remaining, the rest had been burnt. On one of the pieces in the house the following letters were written:S. M. T. H. I. F. S.  March, 27 & 28.What is above related, the captain saw himself, but he also reports, on the authority of four masters of schooners belonging to the Magdalen Islands, whom he saw at Belle Bay and on whose veracity he could rely, that the bodies had been buried by the people of the Magdalen Islands, who also buried the corpse found in the hammock, under the head of which was a bottle of tisanne, (a drink made of roots or plants). These captains also reported that the ship was wrecked between the southeast and east point of Anticosti. A vessel from Miquelon went there and was fully loaded from the wreck, taking also five tents made of the sails of the vessels. The ship’s bell was found hung upon a branch of a tree in the woods. These people brought a quantity of coffee and a trunk from the vessel. Mr. Gabouri adds, that after having heard the report of the captain, he examined some of the sailors separately, who concurred in the same account.

Stories abound from Anticosti Island, including one of a French Chocolate King, Henri Menier, who bought the island in 1895 for $125,000 and turned into his private hunting preserve.

Anticosti Island is considered the “Graveyard of the St Lawrence”, having claimed in excess of 400 wrecks.

If you know more stories about Anticosti Island, write them up and sent them to info@mysteriesofcanada.com.  We will put them on the site with credit to you.

One Response to “ANTICOSTI Island… A Writer’s Dream”

I would like to see eastern Anticosti accessible by plane ,and eco cruise ships, from Newfoundland.An historique site annexed to Mingan Archipelago National park.