The Goblin Lore of French Canada

THE LORE OF the Werwolves has been the subject of a study published some years ago by the writer, and the Goblin Lore is among the most popular and the best known among the Canadian population of French origin. Some typical drawings from nature have been secured by the artist and accompany the following sketch. The readers who are familiar with peasant life in the Province of Quebec can testify to their picturesque accuracy.

It is evident that the Goblin Lore of Canada was imported from France, and that very few changes have even taken place in the primitive form, except, perhaps, in things connected with the difference in climatic or geological surroundings. The French etymology of the world itself is rather obscure, while some lexicologists even pretend that its origin is unknown. The Dictionnaire de L’Academic Francaise makes the word come from the old Norman lutine, which means a ghost, a white lady, or from the Walloon [1] luton [2] or nuton [3]. The most ancient form in French is luiton. Frisch [4] ascribes to it a German origin, and makes it come from laut, sound, noise, while Grimm [5] gives it a Latin derivation, and says it might possibly come from lutus, morning. Grandmadge takes it from the Saxon lytel, which has formed the modern English little. There seems to be something serious in this last etymology, inasmuch as the Goblin lore is of Saxon origin, and particularly as the most distinguishing characteristic of the lutin is its diminutive size. Be that as it may, authors seem to be divided on the origin of the word, but all agree that the superstition obtains, under different forms, in all countries of Europe, of Scandinavian, Saxon, Celtic and Latin traditions. In the French-speaking parishes of the Province of Quebec the lutins are considered as mischievous fun-loving little spirits, which may be protecting or annoying household gods or demons, according to the treatment that they receive form the inmates of the house where they have chosen to dwell. It generally takes the form of a domestic pet, such as a dog, a cat, a bird, a rabbit, or even a reptile of the inoffensive species, or, again, rats and mice that have learned to become familiar with the members of the household.

Black cats always had a rather suspicious reputation as associates of sorceresses and witches, but it is singular that among our peasants they are regarded as protecting goblins, and that no one would think of parting with them, chasing them away or ill-treating them in any manner. Lucky is the man whose house, or barn, or stable, have been chosen as a home by a large family of black cats. White cats (they must be of spotless white) are also considered as lutins, but I do not think that their protective abilities are as highly appreciated as those of their brothers of sombre hue. The same may be said of rabbits, birds or dogs, which have never attained the popularity of the cats, but who occupy sometimes the popular position of household spirits, but rather in a lesser degree. I have known an old farmer, in the parish where I was born, to get in a great excitement and give a good thrashing to a boy who had innocently killed a small yellow snake which he had seen crawling along the grass in front of his house. The old man said that he would have preferred losing his best horse rather than see that snake killed. It had been living in his cellar for some years past, and he considered it as a good lutin bringing him luck and prosperity. I have said that lutins could be protective or annoying, according to the treatment that they received. The most fantastic powers are attributed to the good lutins, and there is hardly any good action or any favorable intervention of which they are not capable. They will procure good weather for the crops, they will watch over favorite animals, they will intercede for the recovery of the sick members of the household, and I have heard of an enterprising lutin who would, during the night, shave the face of his master and black his boots for Sunday morning. 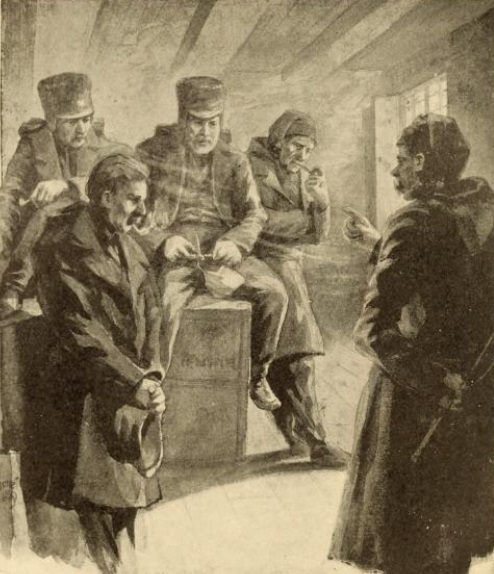 So much for the good lutins, who are treated in a proper and affectionate manner, but woe to the wicked or unhappy man who willingly or unluckily offends his household spirit, be it under the form of a black cat, white dog or yellow snake. Life for him will become a burden, and his days, and especially his nights, will become a pretext for a long series of annoyances and persecutions of all kinds. On rising in the morning he will find his boots filled with peas or with pebbles; his pantaloons will be sewed up at the knee; he will find salt in his porridge and pepper in his tea, and the meat in his soup-kettle shall be turned into pieces of stone. If he goes cutting hay or grain, he cannot get his scythe or his sickle to cut properly; in winter time the water will freeze in his well and his wife never can cook a good tourtiere- meat pie, without burning the crust into a crisp. These are only a few of the ills that await the poor man at his house or in his field; but the stable is the favorite place where the lutin will make his power felt. He loves to take his revenge on the favorite horse of his offender. He will nightly, during months and months, braid or entangle the hair of the tail and mane of the animal, and when the farmer comes in the morning to groom his roadster he will find it in a terrible plight; all covered with thistles or burrs. The lutins will even go further than that when they have been gravely insulted. They will find their way into the stable during the night, mount the horse, and ride it at the highest speed until the wee hours of the morning, returning it to its stall completely tired out, broken down and all in a lather of sweat. And what is the farmer to do to cope with its ghostly enemy and to prevent his carrying out his system of persecution? He will sprinkle with salt the path that leads to the stable, and he will place a bag of salt against the door at the interior of the stable, so that the salt will be spilt when the lutin tries to enter. It would seem that lutins have a holy horror for salt, and that they cannot pass where that condiment has been strewn in their way. But lutins will even evade the salt and enter the building to play their ghostly tricks. Then, there is only one way of putting a stop to their annoyances. The peasant will have to kill one black and one white cat, and, with the strips of raw hides resulting from that double murder, he will make lattice screen doors and windows for his stable, and the lutin never was known that could crawl through an aperture so protected against his wiles. Friendly lutins will attach themselves to favorite children and guide them safely through the infantine maladies of their tender years. They will befriend sweet and comely maidens, and favor them in subjugation of a recalcitrant sweetheart, but they must be treated in a just, proper and affectionate manner, because they seem to ignore the doctrine of forgiveness, and, come what may, they are bound to get even with those who have had the bad luck to incur their ill will or their anger. Such is the lore of the lutins of French Canada.

[1] A people native to southeastern Belgium and northeastern France.

[3] A small, legendary elf-like or dwarf-like creature said to inhabit caves in the French Ardennes and Belgium.

[4] Johann Leonhard Frisch, a 17th/18th Century German linguist, entomologist, and ornithologist, and a pioneer in the field of comparative linguistics.