Ever wonder where the ink on US Currency came from?  The green ink that has been used since 1862 to print United States greenback banknotes was invented in 1857.  Thomas Sterry Hunt, while he was a professor at McGill University in Montréal developed the ink. Hunt was the staff analytical chemist of the Canadian Geological Survey and it was during his time in this position that he started becoming familiar with chromium-containing minerals. For the banknote ink he proposed the use of chromium sesquioxide, Cr2O3, also known as chromium trioxide. This may not seem like a major invention but this green ink is the reason why so many counterfeiters are unsuccessful at reproducing United States Greenback currency.

This green ink also cannot be destroyed by acid, base or any other agent. The green ink has another very important characteristic: it cannot be copied by photography.It seems that Hunt did not benefit as he would have hoped to from his invention. He sold his invention to the United States government for much less than it was worth, considering it has become very widely used. In a letter to a friend he wrote, “As yet it has been rather more trouble than profit.” Hunt’s invention also led to the nickname “greenbacks” for American currency. 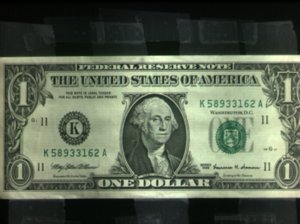 Article Name
Canada Inks the US Greenbacks?
Description
Ever wonder where the ink on US Currency came from? The green ink that has been used since 1862 to print United States greenback banknotes was invented in 1857.
Author
Bruce Ricketts
Publisher Name
Mysteries of Canada