Mysteries of Canada is no stranger to shipwreck stories.  We have reported on the Gunilda Shipwreck, the Titanic, the Ethie and many more.  But to be reporting a Saskatchewan Shipwreck seems, even to me, a little strange. We tend to think of the Canadian Prairies as essentially flat and what rivers do exist we think of as generally shallow and muddy.  I lived in the west for many years and travelled extensively throughout Saskatchewan.  The railways  were the primary mode of commerce and long distance transportation.  But 100 years ago, the North and South Saskatchewan Rivers were thoroughfares for York boats and canoes traveling from Winnipeg west. 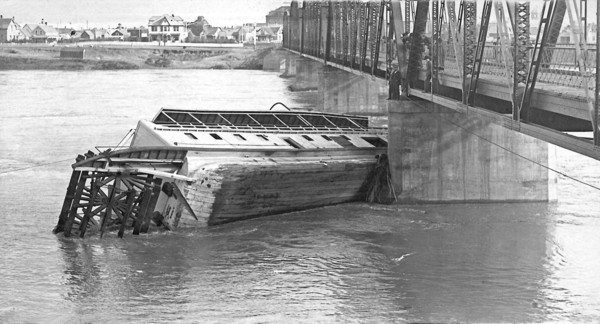 So rare were ships on the prairies that when a steamer for the Pearson Land Company was held up on Long Lake, the only law under which the government could charge the thief was Piracy on the High Seas; a crime punishable by hanging.  The government decided not to press charges.

One Sunday in June of 1908, the “City of Medicine Hat”, a 130 foot river steamer, scraped its way under a railway bridge near Saskatoon.  The ship had a few scant inches of draft clearance under its keel and steering was difficult, even for Captain Ross, a very experience skipper.  Just past the railway bridge was a road bridge.  Making it under the road bridge was the last hurdle before the steamer could be tied up to shore.  Unknown to the Captain, the results of progress were about to do him in.

Telephone was fairly new invention to western Canada. I wonder what the engineers were thinking when the strung the telephone wire across the South Saskatchewan just a few inches above the water line.  If they were intentionally fishing for boats; they caught a big one.

As the steamer passed between bridges the wire slipped under the ship and snagged the rudder.  The ship’s control was lost.  It was caught in a current so fast that even putting the engines astern would not stop the vessel.  It hit the traffic bridge, its bow burst into kindling and it listed 75 degrees to port and sunk to the bottom.  The City of Medicine Hat was a total loss.

Who says Canadian history is dull?