In Normandy on the 18th of August 1944, Major David Currie was in command of a small mixed force of Canadian tanks, self-propelled anti-tank guns and infantry which was ordered to cut one of the main escape routes from the Falaise pocket.

This force was held up by strong enemy resistance in the village of St. Lambert-sur-Dives, and two tanks were knocked out by 88 mm. guns. Major Currie immediately entered the village alone on foot at last light through the enemy outposts to reconnoiter the German defences and extricate the crews of the disabled tanks, which he succeeded in doing in spite of heavy mortar fire.

Early the following morning, without any previous artillery bombardment, Major Currie personally led an attack on the village in the face of fierce opposition from enemy tanks, guns and infantry, and by noon had succeeded in seizing and consolidating a position half-way inside of the village. 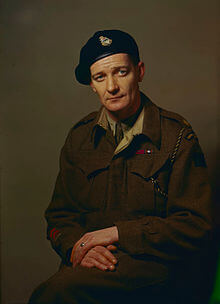 During the next 36 hours the Germans hurled one counter-attack after another against the Canadian force, but so skillfully had Major Currie organized his defensive position that these attacks were repulsed with severe casualties to the enemy after heavy fighting.

At dusk on the 20th August the Germans attempted to mount a final assault on the Canadian positions, but the attacking force was routed before it could even be deployed. Seven enemy tanks, twelve 88 mm. guns and forty vehicles were destroyed, 300 Germans were killed, 500 wounded and 2,100 captured. Major Currie then promptly ordered an attack and completed the capture of the village, thus denying the Chambois-Trun escape route to the remnants of two German armies cut off in the Falaise pocket.

Throughout three days and nights of fierce fighting, Major Currie’s gallant conduct and contempt for danger set a magnificent example to all ranks of the force under his command.

On one occasion he personally directed the fire of his command tank on to a Tiger tank which had harassed his position and succeeded in knocking it out. During another attack, while the guns of his command tank were taking on other targets at longer ranges, he used a rifle from the turret to deal with each sniper who had infiltrated to within fifty yards of his headquarters. The only time reinforcements were able to get through to his force, he led the forty men forward to their positions and explained the importance of their task as part of the defence. When, during the next attack, these new reinforcements withdrew under the intense fire brought down by the enemy, he personally collected them and led them forward into position again, where, inspired by his leadership, they held for the rest of the battle. His employment of the artillery support, which became available after his original attack went in, was typical of his cool calculation of the risks involved in every situation. At one time, despite the fact that short rounds were falling within fifteen yards of his own tank, he ordered fire from medium artillery to continue because of its devastating effect upon the attacking enemy in his immediate area.

Throughout the operations the casualties to Major Currie’s force were heavy. However, he never considered the possibility of failure or allowed it to enter the minds of his men. In the words of one of his non-commissioned officers, “We knew at one stage that it was going to be a fight to the finish but he was so cool about it, it was impossible for us to get excited.” Since all the officers under his command were either killed or wounded during the action, Major Currie almost had no respite from his duties and in fact obtained only one hour’s sleep during the entire period. Nevertheless he did not let his fatigue to become clear to his troops and throughout the action took every opportunity to visit weapon pits and other defensive posts to talk to his men, to tell them as to the best use of their weapons and to cheer them with words of encouragement. When his force was finally relieved and he was satisfied that the turnover was complete he fell asleep on his feet and collapsed.

There can be no doubt that the success of the attack on and stand against the enemy at St. Lambert-sur-Dives can largely be attributed to this officer’s coolness, inspired leadership and skillful use of the limited weapons at his disposal.

The courage and devotion to duty shown by Major Currie during a prolonged period of heavy fighting were outstanding and had a far-reaching effect on the successful outcome of the battle.