Lt Kerr was born in Deseronto, Ontario, 8 June 1894. Already awarded the Military Medal (MM) as a Private and then the Military Cross (MC) and Bar after he was commissioned, Lt Kerr was awarded the Victoria Cross for his conspicuous bravery during the Bourlon Woods Operations on 27 September 1918. The citation reads in part”… Lead his company with great skill, outflanked an impending machine-gun position, rushed the strong-point and single-handed, captured four machine-guns and 31 prisoners…” Captain Kerr died in a freak household accident at his home in Lawrence Park Toronto, 8 December 1929. 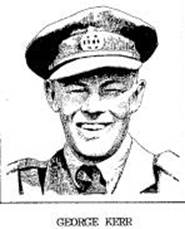