Of all the Victoria Cross Recipients, the story of Rev John Weir Foote stands out.  His was not a combat role.  He was not trying to stop or advance or take a position.  His was a role of compassion. Foote was born in Madoc, Ontario, May 1904. He attended the University of Western Ontario, London;  Queen’s University, Kingston; and McGill University, Montreal . He entered the Presbyterian Ministry, serving congregations in Fort-Coulonge, Québec and Port Hope, Ontario. In December 1939 he enlisted in the Canadian Chaplin Services.  He was posted to the Royal Hamilton Light Infantry. Following the action described in the citation below, Foote was taken prisoner and was not released until May 5, 1945. 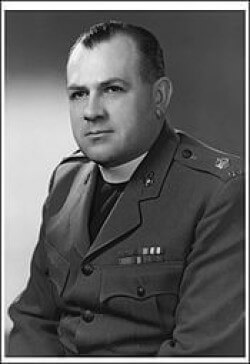 At Dieppe on 19th August 1942, Honorary Captain Foote, Canadian Chaplain Services, was Regimental Chaplain with the Royal Hamilton Light Infantry.  Upon landing on the beach under heavy fire he attached himself to the Regimental Aid Post.  Which was set up in a slight depression on the beach.  It was only enough to give cover to men lying down.

During the the next eight hours, while heavy combat continued, Foote assisted the Regimental Medical Officer in ministering to the wounded.  He also left the shelter several times to inject morphine, give first-aid and carry wounded personnel from the open beach to the Regimental Aid Post. On these occasions, with utter disregard for his personal safety, honorary Captain Foote exposed himself to an inferno of fire and saved many lives by his gallant efforts. During the action, as the tide went out, the Regimental Aid Post was moved to the shelter of a stranded landing craft. Honorary Captain Foote continued tirelessly and courageously to carry wounded men from the exposed beach to the cover of the landing craft. He also removed wounded from inside the landing craft when ammunition had been set on fire by enemy shells. When landing craft appeared he carried wounded from the Regimental Aid Post to the landing craft through heavy fire. On several occasions this officer had the opportunity to embark but returned to the beach as his chief concern was the care and evacuation of the wounded. He refused a final opportunity to leave the shore, choosing to suffer the fate of the men he had ministered to for over three years.

Honorary Captain Foote personally saved many lives by his efforts and his example inspired all around him. Those who observed him state that the calmness of this heroic officer as he walked about, collecting the wounded on the fire-swept beach will never be forgotten.

He was demobilized in 1948, remaining with the Canadian Chaplain Services until that time.  Then he entered the political arena and represented Durham County in the Legislature of the Province of Ontario serving as Minister of Reform Institutions for Ontario.

Major Foote is the only member of the Canadian Chaplain Services ever to be awarded the Victoria Cross.   He died on the 2nd of May 1988. He is buried in Union Cemetery, Cobourg.