Philip Bent was born in Halifax, Nova Scotia and moved to Britain at a young age.  He initially trained as a seaman and was taking his Merchant Navy officer’s tickets when the war broke out in 1914.  He joined a Scottish regiment for a bit of fun as the war was anticipated to be over by Christmas.  How wrong he was.  He was commissioned in the Leicestershire Regiment.He was 26 years old when his deed took place. 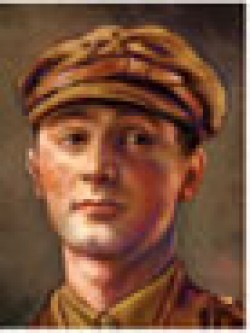 On 1 October 1917 east of Polygon Wood, Zonnebeke, Belgium, when the situation was critical owing to the confusion caused by a heavy enemy attack and the intense artillery fire, Lieutenant Colonel Bent collected a platoon that was in reserve and together with men from other companies and various regimental details, he organised and led them forward to the counter-attack, which was successful and the enemy were checked. The coolness and magnificent example of the colonel resulted in the securing of a portion of the line essential to subsequent operation, but he was killed whilst leading a charge.

He has no known grave and is commemorated on the memorial wall at Tyne Cot Cemetery, Belgium.  His Victoria Cross is displayed at the Museum of the Royal Leicestershire Regiment in Leicester, England.