Martin Berrigan arrived in the Yukon during the height of the Klondike Gold Rush.  He worked the big gold dredges, a job which demanded a great deal of physical strength and stamina. After a number of years of mining, Martin began to feel run down and is reported to have said, “I just thought life was too short to allow for getting sick”, so in 1939 he moved to Whitehorse to slow down and find another way to make a living.

Martin’s timing could not have been better. Construction was to begin on the Alaska Highway and Whitehorse was swarming with American army personnel and civilians with nowhere to live. Anyone who could build a cabin could make a lot of cash and Martin set about to do just that, but his cabins were like no other. To maximize space and accommodate more people, he built two and three story structures known locally as the “log skyscrapers”. 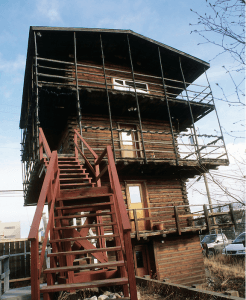 Working on his own, Martin was well into his 70s when he built these architectural wonders. He cut the logs about three miles from town and drove them by horse team to the construction site. He devised an innovative pulley system to help him lift the logs in place; each log estimated to weigh 300 lbs. He then notched the logs and fitted them into position, pounding one foot spikes through to strengthen them.

Martin did not live long enough to reap much of the benefits of his labour. He died shortly after finishing the last skyscraper. He was 78 years of age.

In 2000, the log skyscrapers were officially declared a municipal historic site. They can be viewed on Lambert Street between Second and Third Avenues.

From: A Guide to Who Lies Beneath Whitehorse Cemeteries

One Response to “Whitehorse Skyscrapers”

Hmmm. Maybe this doesn’t quite belong here, but rumor has it–this is from an investigative journalist in California–that Donald Trump’s grandfather once owned a house of ill repute in the Klondike. Perhaps that’s al it is, a rumor, but the way the man acts…